Microgaming promises some hot action at the reels in Hot as Hades, its latest 5 reel, 20 pay-line video slot that is soon to hit online casinos

Click here to visit Royal Vegas and claim the above promotion

Hot as Hades has all the trappings of Greek mythology with legends like Poseidon, Medusa and Cerberus taking center stage. The game is packed with features that include a Wild Multiplier, s new Held Wilds feature, and an exciting bonus game. Adding to it is some high quality animations and 3D graphics that are sure to have slots enthusiasts coming back for more. Hades, the god of the dead in Greek mythology, may have been a fearsome figure that no one was in a hurry to meet, but this video slot is most entertaining with the highlight being its features and the possibility to win 2,000 times your stake.

The two bonus features are the major attractions in Hot as Hades. There are 5 free spins up for grabs in the Super Mode feature that is randomly triggered. In addition, there are 3 static Wilds to which one more Wild can be added on each free spin, which has the potential to result in a lucrative payout up to 2,000 times when combined with a 2x multiplier. Watch out for the Crystal Helm Feature with a multi-tiered bonus that is triggered when 3, 4, or 5 scatter symbols land on the reels. There are five levels with that can be played one at a time. Each level has some nifty cash prizes where you need to do different tasks such as choosing a pot, a path, a shell, cloud, or a chest.

What’s great about Hot as Hades is that the rewards are plenty, especially in the Crystal Helm feature. Slots enthusiasts who have spun the reels in Avalon II may relate to this slot well. For the most part, it is a medium variance slot that combines great entertainment and the potential for a big win. Get ready for some boiling lava and bursting fireballs that sets the tone for some hot action at the reels accompanied by a classic soundtrack. Here’s to another cracker of a slot from Microgaming which you will soon find at Microgaming powered casinos.

Click here to visit Royal Vegas and claim the above promotion Play 'Blackjack Singlehand' for Free and Practice Your Skills! 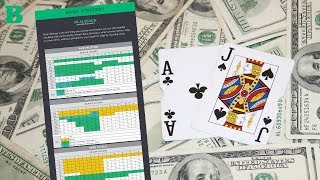 Blackjack is a game that is often taken very seriously by gamblers across the world....