Based in Canada, Parlay Games Inc. is one of the top online bingo software providers that holds patents in the US and Canada although it maintains sales and administration offices in Europe, UK, and Latin America as well. The developer has been powering bingo sites since 1998 and also offers a selection of casino games and a social gaming platform in addition to a complete back-office player account management system. The company has worked with some of the top betting brands including Paddy Power, Paf, and Unibet.

Parlay holds licenses from several jurisdictions around the globe, which includes licenses issued by the UK Gambling Commission for its casino and bingo games, and a software license by the Alderney Gambling Commission. Following the success of its bingo platform in 1998, the company forayed into the online casino market and released its first full service casino software platform in 2004, which included a selection of proprietary games.

Speaking of software, Parlay has known to create some of the best games available in both download and instant play mode. A number of their titles are also designed for mobile devices that include iOS and Android. Many of its games are developed in HTML5 while its platform can be hosted from Parlay’s own servers or installed on the online casino’s servers. The developer also offers a third party integration platform while online casino’s can look forward to a range of features in their casino management modules.

What every online casino enthusiast looks for is the quality of games and Parlay Games Inc. does a great job of that. While they may not be known to produce games in large quantities, they do have a small yet impressive library of video slots, table games, and video poker. Since the company did begin as a bingo provider, bingo fans will find a choice of 75-, 80- and 90-ball bingo games with hundreds of patterns and scratch cards as well. Its social gaming platform is already creating a buzz in the market.

While bingo is Parlay’s forte with many of its bingo halls featuring a free play option, the developer does have a decent selection of slots, roulette and blackjack games. While the games may have a simple look and feel their slots do have a resemblance to a real slot machine. Table games enthusiasts will like the way the tables, cards, and chips are drawn, and the ease of controls. The developer’s video poker games include single hand Jacks or Better, 10’s or Better, and higher risk, bigger payout games like All American Video Poker. You will find a range of wild card and bonus pokers, and multi-hand games as well.

Among their popular slots titles is Bee Land, a 5-reel, 20 pay lines slot, while Merry Bells, Slot Contraption, and Trolling for Treasure, are also a hit with slots enthusiasts. What's great is that as many as 20 of Parlay's slots feature progressive jackpots. And then you have Parlay Sexy Slots, a part of the developer’s gaming platform with a selection of titles of an adult nature.  Not surprisingly, these games are some of the hottest and includes Heels n’ Reels.

While Parlay Games Inc. is primarily a bingo software provider, its casino offering is enough to entertain online players to the fullest. Play 'Baccarat (Punto Banco)' for Free and Practice Your Skills! 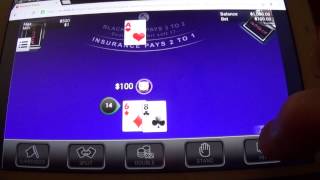 Playing Blackjack from Your Mobile Device

Blackjack is one of those gambling games that have an aura about them, an aura...