Euro Millions - Every Tuesdays and Fridays

Euro Millions is a bi-weekly European lotto with draws on Fridays and Tuesdays and is meant for the residents of European Union (EU) countries. Since all EU countries play this lottery, the prize becomes breathtakingly huge. If the lottery goes on for a few weeks without being won, the prize pot can become as large as €185 millions, which is truly life transforming.

The nine EU countries that take part in the Euro Millions are Austria, France, Luxembourg, Belgium, Spain, Ireland, Portugal, UK, and Switzerland. Those interested can play the Euro Millions online and even check the results online. A free Euro Millions app for iPhones also helps players to view Euro Million results when they are travelling.

Euro Million, which was launched in 1994, was originally intended to be in one currency, but a wide range of factors did not make this possible till nearly ten years after its launch.

The first draw was held on Feb 13 2004, which happened to be a Friday and was presented by Camelot, Francaise des Jeux, and Loterias y Apuestas des Estad in the UK, France, and Spain, respectively.

The first Tuesday Euro Million draw was held on May 10, 2011, a Tuesday, before which draws used to be held only on Fridays. Players were more excited than ever when their favorite Euro Millions lotto turned bi-weekly because it gave them more chances of winning. The lotto was made spicier than ever by the introduction of some brand new rules—a 13th tier and extra Lucky Star Numbers. The 13th prize tier presented a small prize to players who could successfully match 2 main numbers.

Lotto players love the idea of winning the large prize pot on Friday, spending the weekend in wild celebration, and quitting their day job on Monday, which is why the Friday Euro Millions are more popular than the Tuesday Euro Millions.

How to Win Euro Millions

The draw is held at 9:00 p.m. UK time or 10:00 p.m. CET and the results are published within one hour. However, the winners of the major jackpots will come to know the good news that they have won only at noon.

Sale of tickets ends at 7:30 p.m. UK time for the Euro Million draws, but the ticket counters are thrown open again at 9:00 p.m. UK time so that lotto players can start purchasing tickets for the next draw. 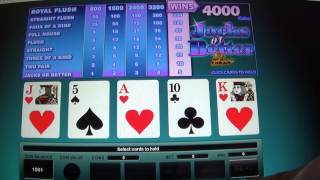 What happens when you take the game of poker and put in on a computerized...